No, this is not a wind up, last Saturday I fished the final round of the Basingstoke Canal League at Fleet and the match was won with a double figure carp caught on a top kit with floating crust, apparently the angler who caught saw half a dozen carp cruising around amongst the branches of the tree opposite, so he set up a 'floating crust rig', a length of 0.22 line with a big hook and nothing on the line. Half way through the match a carp started to feed on some spilt liquidised at his feet, he picked up his crust rig and the rest is history, as the saying goes, later in the match the guy at the next peg had one as well, so it was no fluke, but in 'March'.

This peg is one of the best feature pegs you are ever likely to see, the last Basingstoke canal national was won from it and I know my team mate Will Raison goes down there and catches them up to 18lb on crust and a pole, next to the branches, Awesome.

By comparison my match was very 'tame', I had drawn a stretch of the canal I have never seen before, at the Fox and Hounds, near the pub. My initial thoughts  when I got to my peg were good, plenty of cover along the far bank, the canal had a nice bit of colour in it, which I was surprised to see because normally it is crystal clear, the boats cant use the locks due to repair work on a flight of locks.

The weatherman had forecast it sunny after lunch, very little wind and 14 degrees, a pleasant day for fishing but not ideal conditions for the fish to feed, but after the recent cold weather it was going to be a nice change.

My peg was 2 from the end of the match, a good area apparently, but the end peg looked a real flier. My peg plumbed up nicely, 4.5-5ft down the middle and 3ft at 11.5m, my basic plan was to fish bread at top six and hopefully catch roach and the odd skimmer early and feed groundbait and squatt over, with some chopped worm down the middle for a bonus perch or two. Alex Clements was at the next peg and he had a jack pike sat in front his keepnet at the start, while I was plumbing up a pike grabbed my plummet and bit it off, I hoped this is not a sign of things to come.

When the match started, I fed a large ball of liquidised and gravel at top 6 and cupped some loose groundbait at 11.5m with some chopped worm and caster 11.5m down the peg to my right in the deepest water. First drop in on the bread I caught a small roach, then another and then a small skimmer then things went quiet, so I had a quick look on the lobworm rig, but nothing. The angler at the next peg caught a 3lb bream after half an hour and I was going nowhere fast. I went on back on the bread, but the roach were really small and I missed a lot of bites, so it was back on the chopped worm to try for a perch and first drop in I caught one about a pound, happy days. this set the pattern for the rest of my match as I kept putting a few small roach in the net and tried for the odd perch.

I finished with 4 perch and a pound or so of small roach for 5lb 2oz and third in my section, our team had been leading the league all the way through but we got pipped at the post by the other Dorking team, but it was great league, well run and Andre, who runs the league, deserves a big pat on the back. 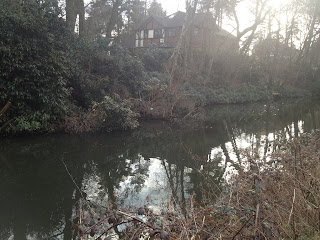