This years Garbolino sponsored Silverfish Festival had a real european feel about it as anglers from France and Holland took part. Jack Valkenburg, a dutch Van den Eynde distributor and Baptiste Cortellemont a french under 23 international, had come to sample the great fishing.

My practice for this week started on Saturday when I fished peg 28 on Twin Oaks, the weather was decent for Cornwall at this time of the year, showers and not too windy. The fishing was awesome, as you might expect as this lake has hardly been fished since the October festivals, I caught an F1 every chuck at top 5 loose feeding casters, although the fishing was brilliant, as a practice for what was to come it was of very little help, but it was nice to get the elastic stretched and catch up with a lot of friends who chose not to fish but walk around seeing what was being caught. 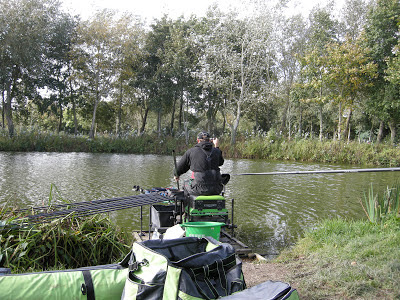 Sunday morning I woke to gale force winds and torrential rain, when the lodge is shaking and the rain is hammering down on the roof its hard to get out of bed to go and practice, and most people didn't. I had drawn Trelawney on the first day, so after a good breakfast decided to brave the weather and give it a go for a few hours, I set up on peg 23 and just fished a short pole, it was too windy to fish a long pole, as expected I caught plenty of F1s on dead red maggot over Thatchers groundbait, this groundbait has the right amount of crushed pellet in it for winter fishing, the F1s and skimmers seem to like it. I only fished for about 2 hours, due to the weather, but caught about 25 F1s and some skimmers then used the excuse I needed to get some kit ready for the next day, when really I wanted to get out of the wind and rain.

Monday morning arrived to the gale force winds and torrential rain, this was the pattern for the whole week, and I was full of excitement about the festival but not looking forward to doing battle with the wind and rain. I drew peg 12, a peg I was happy with but knew that the peg to draw was 10, recently this peg has been the one to draw, as the bulk of the F1s seem to shoal up here, and have done for the last few years in this festival, still it was a lot better draw than some of the pegs in this section.

I fed 3 lines at the start, a 5m line with caster and a 11m and 14.5m line with groundbait and dead reds, the 14.5m was off at an angle towards peg 11 as I thought that is where the majority of the F1s would be, and that is how the match panned out, I caught steadily on this line for most of the match, until the last hour when I really sacked up on the 5m line. I finished with 56lb and a section win to start the week off nicely. Baptiste Cortellemont was on peg 10 and he fished a brilliant match to run me a close second with 50lb, when you consider that there arent any F1s or commercial fisheries in France he did really well.

Tuesday, I was on the split section between Pollawyn and Sycamore, I drew peg 14 on Pollawyn, the day before there was some 30-40lb weights on the high bank, fishing caster shallow and feeding a lot of bait, 5-7 pints, but the wind had swung in a more northerly direction and had a real chill to it, I set up 3 shallow rigs but had real doubts I would catch on them as my peg was getting the full force of the cold wind.
When the match started I fed a 5m line and a 11.5m line with groundbait and loose fed over the top hoping to catch shallow. My gut feeling proved right that I wasnt going to catch shallow, I never had a bite there, I never had a bite at 5m but caught 27lb of skimmers over the groundbait, this was good enough for second, peg 22 caught 30 odd pound of F1s to win the lake.

Wednesday, Twin Oaks, Mondays match on here was a decent match, dominated by the wind, all the F1s followed the wind, Tuesdays match was harder and I wasnt sure what to expect. The wind had turned to northerly and eased up a lot, Northerlies on twin oaks is in your face, so waggler fishing is an option, I set one up at the start as some fish were caught on it the day before, only the more sheltered pegs. I also fed a long pole line and a short pole line. After an hour I had not had a bite on the pole, like  a lot of people, but could get an odd bite on the waggler, to my right the next 2 anglers were catching small roach shallow, I had tried it and couldnt get a bite. I had a very uneventful day, only getting an odd bite on the waggler cast tight to the far bank, feeding small balls of groundbait, I finished with 5lb 1oz of small roach and 2 F1s, for third in the section, Baptiste was one of the anglers on my right, he won the section with 9lb of small roach.

Thursday was the only windless day of the week, and I drew 20 on Pollawyn, a decent peg in this section, the day before Mark Harper drew peg 19 and won the lake with 30lb, so I knew I was in with a chance from this peg. I set a long and a short pole and a waggler. 30 minutes into the match I couldnt get a bite on the pole and the lad on 19 to my left had 9 big skimmers in as many drop ins, so I swapped to the waggler and started to catch F1s straight away, I fed small balls of thatchers and loose fed about 2 pints of casters on the waggler line. I then caught F1s, skimmers and roach for the rest of the match and finished with 50lb for a lake win.

I was now 4th overall and the last day I would be on Jennys. When I woke on Friday morning the wind was blowing a gale in a North Westerly direction, so not much long pole fishing again. I drew peg 15 and had the wind slightly off my back, so I set up a long pole and a short pole. When the whistle blew I started on the long pole line but couldnt get a bite, the only person catching F1s was Ricky Teale on the end peg 19, so I spent the rest of the day fishing short for roach with caster and caught 33lb 12oz for another section win, it was a very close section as Baptiste and Steve Hemingray both caught 30lb+ nets of roach, Ricky Teales F1s didnt last long and he had to settle for fourth.

I finished the week with 3 wins, a second and a third, this was good enough for second overall, only beaten by Adam Wakelin who had a great week with 4 wins and a second. Last year I won this festival and Adam was second, so he got his own back, interesting to point out that Adam and I used the same groundbait mix. 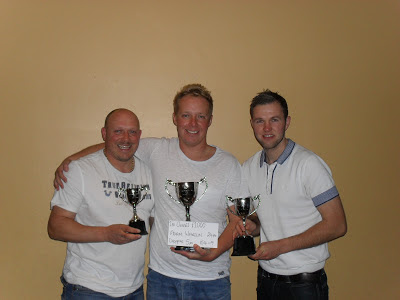 It was another well run festival by Clint and his crew, but next year Clint, book some better weather please!!! and a big thank-you to Darren Cox and Garbolino for an excellent set of prizes. 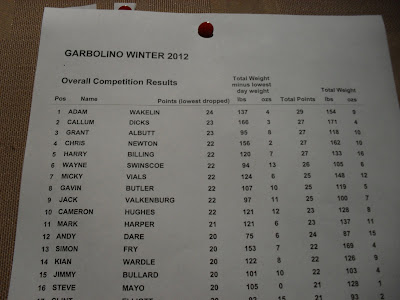