Before Xmas all the locks in this area of the K&A were chained up due to the lack of rain, the water sources that keep the canal topped up were extremely low, so British Waterways stopped all boats using the locks.

My first thoughts when I heard was 'great' a canal with no boats, this stretch has a marina at Great Bedwyn and the boat traffic can be none stop, on second thoughts it could be gin clear without any boats.

The first trip after the locks had been closed I wasn't sure what to expect, when I got there the water was a funny 'tea' colour, not clear or coloured, I have never seen the canal this colour before.

The session wasn't as good as I had hoped, I caught about 8lb of roach and perch on squatts and groundbait, not very good for this stretch, good double figures is normal when you practice by yourself.

My next trip was just after Xmas, by now the locks had been closed for nearly 2 months and the water had cleared, it was now a nice winter canal colour. I fished a feature peg and caught 30lb of perch on lobworms, fish up to 3lb. This stretch has to be the best piece of the K&A I have ever fished, 2 days later I returned and caught 14lb+ of bread punch roach.

End of January the canal froze over, like every piece of stillwater in the area, yesterday was my first trip for a month, the canal was still frozen in places and the water was clear and cold, a strong NW wind made the 8 degree air temperature feel alot colder, but 8lb of punch roach with a few skimmers told me it was going to be a good semi final.

Bloodworm and joker is not normally allowed on this stretch so it will be interesting to see how it fishes in the practice matches, if the weather is mild enough I wouldnt be surprised if we dont need it. Given good weather and not too many matches on the stretch it could be a very good semi.

Practice matches are arranged for sunday 4th March and sunday 18th March, to book in ring Nigel Franks on 07713 262 959 or email  nigelfranks@mobileemail.vodafone.net. Day Tickets are available if you want to practice, from the post office in Great Bedwyn £6 each.

If you have a practice avoid sunday 11th March and Sunday 25th March as there are canoe races going through this stretch, more information is available on the clubs website   http://www.mdaa.co.uk/ 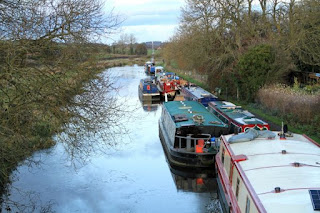