Thursdays evening match, was the best for a long time, now that the cold weather appears to be behind us 'fingers crossed'. This match was fished on the Mud Dock and Police Launch reaches.

The docks were a nice colour, the air temperature was 'almost' mild and the wind was gentle, and the skimmers fed better than they have done for weeks.

Top rod on the evening was Alan Healey with 26lbs 11oz whos catch was made up of skimmers caught using a cage feeder with liquidised bread in it and double red maggot on an 18 hook, this has been the best way to catch the 'docks' skimmers for quite a few months now.
Second was 'red hot' Andy Curry with 9lb 0ozs of skimmers caught the same way as the winner, Andy was on the end peg.
Third was Andy Bird with 8lbs 8ozs of skimmers and fourth was match organiser Dave, I never get a lucky bream, Clutterbuck with 6lb 13ozs of skimmers and dace caught on a pole with groundbait and maggot, from peg 2.
5th was Dynamite Baits backed Pete Sivell, who has a great run of form recently, with 5lb 7ozs of skimmers on the bread feeder.

If you fancy fishing any of these thursday evening matches ring the shop 0117 9508723 and ask to speak to Dave. The draw is at 5.30pm and the fishing is from 6.30 to 10pm. At certain times of the year space is restricted but the fishing can be fantastic, the matches at Baltic Wharf in the summer are very popular, and you quite often need 20lb to win them. Two 'series' of matches are also run at different times of the year, they are a great bunch lads who fish these matches and everyone is made very welcome. 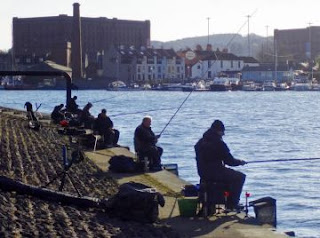