Pellets through the Ice??

Sunday, I went to Gold valley and just like the last 2 weeks it was frozen solid, when we arrived in the car park the temperature was minus 3, that was positivelly tropical as a couple of nights earlier the temperature went down to minus 11, now thats COLD.

Still, 30 plus keen, or mad, anglers were at the draw, hoping for a days fishing through the Ice. The big freeze in europe has meant that no bloodworm and joker has been coming into the country for a few weeks, so this match it was banned in an effort to make it fair for everyone. Normally as soon as Gold freezes everybody reaches for their ice breakers and jokers, but not today.

The start of the match was put back to 11am, to give everyone time to clear the ice, and most people needed it as the ice was 2.5 inches thick for most people. I drew Bat lake on the canal bank, an area that has been good in recent weeks, so I was happy. It took me a good hour to clear my peg, some people took a lot longer, it definitely helps to be young and fit at this game.

The whistle blew for the start of the match, I potted in my bait, and headed for the customery cup of tea in the club house, at 10 minutes after the start of the match there was more people in the club house drinking tea than sat on their boxes, everybody is having a laugh, moaning about aching limbs and looking out the club house window incase somebody catches a fish and then everyone heads for their seat boxes. about 11.30 nobody had caught and the clubhouse cleared as everone left in the hope of catching something.

I returned to my peg and didnt have long to wait for my first bite, a very welcome small skimmer, quickly followed by another, this was the pattern for the day, as I caught small skimmers all day on Pellets, this is the first time I have ever caught skimmers on pellets through the ice, normally it would have been fishing bloodworm and joker. The jungle drums were soon active and it was clear that I had drawn the best lake as Gold and Bungalow were a lot slower, everyone at my end of Bat lake was catching and enjoying the day.

As the day went on the air temperature gradually went up and by the end of the match it had reached 4 degrees above and everything had started to thaw nicely, could this be the end of the cold spell? I hope so.

I caught steady for most of the match and finished up with about 150 skimmers for 26lb, a great days fishing, I love fishing through the ice, its clearing the bl**dy stuff I dont like. This was enough to win on the day and pick up £300, the 2 hour drive home is a lot sweeter after a pick up like that.

Whilst in the club house after the match someone asked me,' would you have caught the same weight with bloodworm and joker?' I dont know, was my reply, what do you think?? 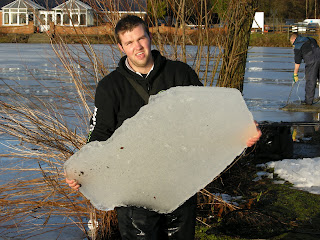