The last three weeks have been some of the busiest of the year for me, I have fished nearly every day and only slept in my own bed for 2 nights, as soon as the world club champs qualifier was over it was straight down to Whiteacres on the sunday evening arriving at 11pm, I had drawn Porth for the first day of the Maver festival, so it was an early start to swap the 50g flat floats from the Trent for a more gentle approach for the Porth skimmers.

I had drawn peg 36, nobody knew what to expect, the lake was well coloured after the recent rain and with only carp anglers fishing the place since the last festival it was going to be a bit of a 'guessing' game for the first match, this section is not the best for bream as it is the shallowest section of the lake, so my choice was simpler than if I had drawn the 70s, I was going to fish my normal Porth match and hope all the bream would stay in the deeper sections.

At the whistle I started on the feeder and caught a few small skimmers, my plan is always to catch on the pole as soon as possible, every time I picked up the pole I could only catch a couple of skimmers before they dissapeared, then it was back out on the feeder, this seemed the pattern for the day, at the end of the day I wondered if I should have stayed on the tip for the full 5 hours, Dean Barlow was on the end peg 40 and had caught steady all day and looked to have won the section. When we weighed in Dean had 10lb and I had 12lb 8oz, a nice way to start the week, so now it was back to the lodge and catch up on some sleep.

Day 2, Bolingey, I drew peg 9, not a peg I would have chose as 20lb was caught of it the day before and 175lb was needed to win the section, ummm. Bolingey was the clearest I have ever seen it and was not fishing to its full potential, Mike, who owns the lake, told me that during September he had approx 1000 anglers fish the lake, now that is a lot of anglers and pressure for such a small fishery, so it was no surprise that the fish were going to be craftier than normal. 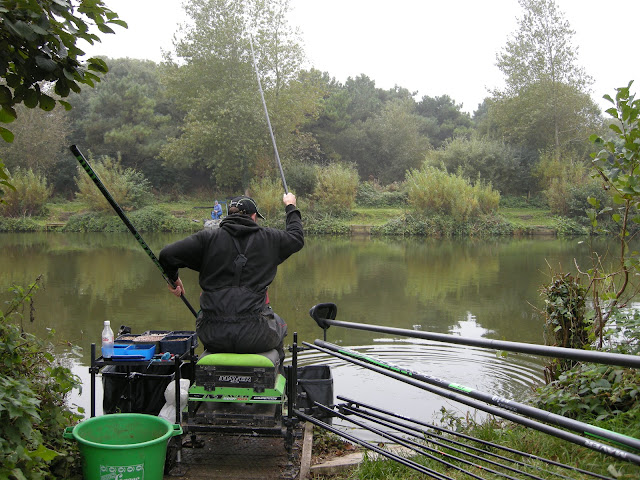 I had a pretty uneventful first 3 and a half hours to my match only putting 3 carp in the net, but during the last hour and a half some fish turned up on the 5 meter line and I put 12 in the net for 90lb, to win a very close section, catching late at 5 meters was going to be a feature for a lot of anglers over the next 2 weeks and a 'bottle' job for many.

Day 3, Match Lake, I drew peg 24, this peg is in with the high bank pegs 15, 16 and 17. These pegs are the best on the lake at the moment and were going to win the lake most days over the two weeks, so I had my work cut out. I have never drawn this peg before, but a quick chat with Des and I had a plan. Basically the plan was to fish 16m towards the aerator and then finish up at 5 meters, and it worked perfectly, I caught 117lb, on meat, and a lake win, I was now joint top over the 3 days.

Day 4, Trewaters, I drew peg 47, a peg I was not very happy about, in this section there are 2 end pegs and  peg 51 had been dominating this section for most of the week. To get the best out of a peg on this lake you usually need to set up a lot of gear, it is very unusual to catch all day on one or two lines, unless you are on a shed load, so I set up a feeder, long pole line, short pole line and 2 edge rigs, the plan was to feed all my lines and keep rotating them in an effort to keep catching. This is exactly how my day planned out and I kept putting fish in the net all day for 57lb and second in a very tight section. One day to go and I was still joint top. 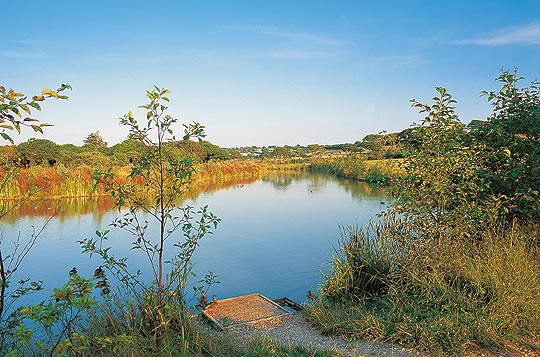 Day 5, Twin Oaks, I had drawn peg 10, normally all the fish are on 14 and 16, but Des had won his section on my peg earlier in the week, so I was still hopeful. I have drawn this lake many times over the years and this was the first time I have draw higher than than 8, so I was gradually getting nearer the most consistent peg in Cornwall, no 16.

I started my match on the feeder, like everyone else, I spent the first hour without a bite, whilst I watched the angler on 16 and those around him catch steadily, at this point I feared the worst, during the second hour I started to get a few bites, but was always playing catch up. Towards the end I started to catch well at 5m and finished up with 111lb, 126lb won the section and I was third, how the poor start had cost me.

This gave me 35 points dropping a third, Des won the festival with 36 points and I was finished fourth in a very close finish, well done to Steve Ringer and Grant Albutt who were second and third.