Last week I spent the week practising on the Trent at Newark Dyke with my team mates for the weekends 2 day final.
My first practice day went well catching 6lb 12oz, roach on bloodworm and 1 chub on a waggler, 2nd day I fished a peg full of weed, couldnt fish properly, and could only catch 2lb, I'd gone from hero to zero and this illustrated perfectly the peggy nature of the venue.
The next 2 days practice were similar, one good day, one bad day. The team meeting on friday night we were cautiously confident, we knew the draw was going to be important but we had sorted a few things during practice, the feeding was going to be crucial, and given a decent draw we could do the 'business'.
The first day I drew E section, an area we had practiced, I drew at the bottom of a big bay. This bay had very little flow but held some big fish, barbel, bream and even tench.
The team plan was to fish for roach except in A section, were you needed to catch bream or barbel. My match started well by catching small roach that had responded to my initial heavy bombardment, even though the fish were small, at least I was catching, unlike some of the anglers above me. Peg 1 and 2 were the best draw in the section and the barnsley lad on the end peg got off to a flier. I was beating the anglers around me and was happy as long as I kept a few fish coming.
I managed to keep these roach coming steadily to the net for most of the match with regular topping up with joker, in the last hour I started to get a better stamp of roach and my weight improved a lot, I finished 3kg 160g and won the section, luckily for me only 1 big tench was caught, 5lb, and the barnsley angler on the end peg caught lots of fish, but no quality, he finished with 2kg 200g. and third place.
The team finished second on the day, 7 points behind Hotrods, who had a brilliant team performance, scoring only 18 penalty points.
The Sunday match I drew F section, but not the end of the section, where most of the fish were, still it was a team match and team matches are won and lost on the bad draws not the good ones. I knew what to expect and there were very few surprises in my section, the anglers below me all started catching quality roach straight from the off and I was struggling to get a bite, whenever I got one it was a good fish, after 1 and a half hours I had only six roach and then the peg dried up and had to watch the anglers downstream of me catching regular. for an hour and half I never had a bite, then in the last hour hour I started to get the odd quality roach and probably doubled my weight to finish with 2kg 360g to finish fifth, a position I felt I had done my job for the team.
On the day the rest of the team did brilliant and we finished with 17 penalty points to win the overall and Hotrods finished a very creditable second followed by Barnsley, so its off to Portugal next June for the World Club Championship, on a venue I have fished a couple of times. 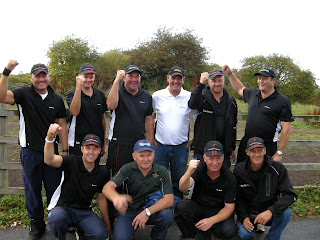