Last Saturdays match on the 'Bazzy' was the best I have ever fished, the spring like weather really encouraged the fish to feed, little did we know what was instore for the Sunday. The air temperature was about 8 degrees and hardly any wind, it was a real pleasure to be out on the bank, after the last month of easterly winds and dire fishing.

We fished a stretch of the canal at Ash Vale, I have only fished this bit once before, I think this was the first time this stretch had been used all winter, that combined with the mild weather and the canal fished its 'head off'

I drew not far from Napiers pub, a nice looking stretch, plenty of bankside cover and protection from any cold winds. The canal looked a good colour, the level was normal and a very slight tow, everything looked good. When I got to my peg, I had an overhanging tree off to my left, perfect cover, but there was a lot of similar trees along this section. 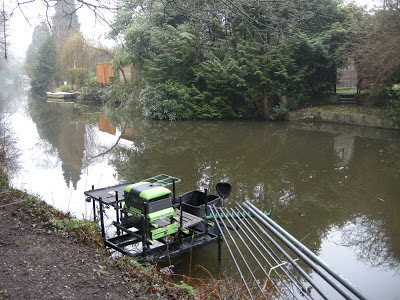 When I plumbed up before the start my peg was a different shape to most on this canal, the boat channel was closer than normal, probably because all the boats came my side of the canal to avoid the tree, this meant I had a steep slope on the near side and a steep slope on the far side, not the ideal shape, I think the fish prefer a nice gentle slope, anything steeper than 45 degrees natural food and silt doesn't collect on it, it just gets washed away. So instead of fishing my normal 5m line, I decided to fish top 6 where the bottom had flattened out and my bait would stay put when fish came into feed.

When the whistle went to start the match, I fed a pot of liquidised bread at top 6, some chop worm and caster towards the tree at 14.5m, in the deepest water and some groundbait and squatt at 11.5m in about 2.5ft of water. I started on the bread line and first drop in I caught a decent stamp roach followed by 2 more, before a pike took the next, he must have been hungry as he took the roach and bit my line above the 4 inch hook length, so I had to set up another rig. Everyone around me had a good start, some people caught skimmers straight away as well as roach.

Once I had set up again, it was straight back into catching roach, this canal is awesome I thought, next drop and I had a 12oz skimmer, followed by another. I then decided to have a quick look on the lobworm for an early perch, first drop I had a 12oz one quickly followed by another, everyone around me had a good start, then just as quickly as it started, everything slowed down, how I was cursing the time lost to that pike setting up another rig. Everyone in sight had the canal switch off at the same time, just as well really as if it lasted for all the match there wouldn't be any fish left in the canal, they would all be in keepnets. 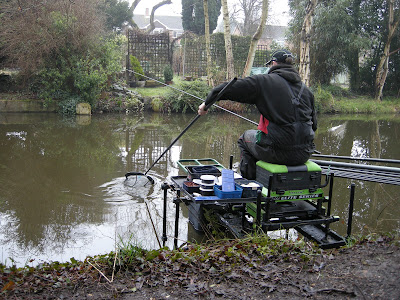 After the lull, I gradually started to catch roach on punch and was able keep the bites coming for most of the match, I kept trying to catch another perch, but never had a bite. It seemed all the better fish fed for the first hour and then shut up shop. I tried my groundbait and squatt line that had been so good for me in the past, but never had a bite on it. To keep bites coming I had to start another bread line at 11.5m off to my right. This line kept the roach coming when the top 6 line dried up.

Stories were coming along the bank that Dave Guntripp, a new Dorking signing, was catching skimmers one a bung, at the other end of my section, so I knew I was never going to beat him. the anglers either side of him were also catching, interesting they were not catching roach only skimmers, the opposite of me.

At the weigh in, I had 9lb 12oz, 6lb of roach and the rest was 2 perch and 2 skimmers, a lovely days fishing, this is why I travel 2 hours each way. As expected Dave Guntripp won my section with 19lb+ and the anglers either side had 14lb and 13lb. I was only fourth in the section of 11 anglers.

Will Raison won the match with 20lb skimmers and there was a total of 6 double figure weights, all skimmers, what was interesting when I watched the weigh in and saw the mix of different species that people caught, I came to conclusion that you caught what was in front of you, some people only caught skimmers, others only caught roach and some had an odd perch thrown in. All the big perch I saw caught came early in the match, probably due to the lower light levels and are caught from swims with plenty of far bank cover or plenty of weed, typical perch, somewhere that they can lie in ambush waiting for a roach for their next meal .

This is the second year I have fished this league, in this years series I caught  total of 38lb in 4 matches and that included a 1lb 1oz in one of the matches, when it snowed, awesome fishing.

On the team front, my Dorking team finished second, well done to Maver Image who beat us, lets hope the canal fishes as well next year. 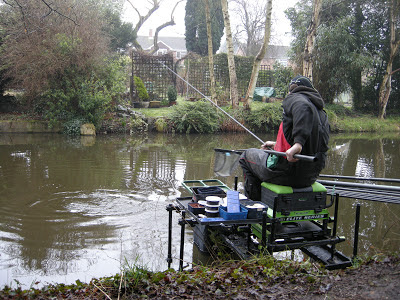