Spring came early for this match, a sunny day, very little wind and an air temperature of 12 degrees or more meant a lot of anglers fished in a tee shirt all day.

The previous weekend the CIPS practice match on the saturday was won with 24lb on the pole and the sunday feeder match was won with 32lb so everybody was 'hoping' for another good match, but sadly the canal fished to its usual 'patchy; form.

This was the final round of the series and things were tight amongst the top 4 teams with my Dorking team leading. The draw was kind to us and the top Starlets team, we both had 2 end pegs in our draw, I had drawn peg 61 on end peg near the new road bridge at Hempsted, and Des drew our other end peg at Pilot, by the way its not true that Des and I draw better than Ralph Harris.

This round of the league bloodworm and joker was not allowed as there wasn't any coming into the country again. so most people were unsure wether to fish the 'bread' or give it a big 'continental' barrage as is normal in CIPS matches.

I took enough bait for both approaches but decided to ignore the bread and fish with a groundbait mix of Sensas lake and 'Thatchers' fishmeal. I cupped in 10 balls at the start with maggot, caster and worm in it, for most people the first hour was very slow, I had 1 bite, a skimmer about 1lb+, nobody in the section had caught much except the RAF lad who used liquidised bread and punch approach, his first hour he had caught 4 skimmers of a similar size to me.

This was really questioning my approach, should I have fished the bread or would his peg die and mine get stronger towards the end, as this is what normally happens, after 1 hour and 20 minutes and no more bites I added some gravel to some liquidised bread and cupped a large ball at 13m off to my left at 10 o'clock and left it for 10 minutes.

When I went on it I caught a skimmer first drop in and another second drop in to be followed by a third 10 mins later, I was now thinking I had really dropped a b****ck. This bread line didnt last much longer and I caught some better fish over my groundbait line towards the end, I finished with 9 skimmers for 14lb 12oz.

This was enough to win the my section and finish second in the match, Darren Cox won the match on hempsted bend with 23lb of bream on the slider, it was an excellent display, sadly this is something that is 'dying' in modern match fishing. Third was also on the slider, Cameron Hughes caught 13lb on it, near Darren.

Cips rules are so different to modern 'commercial' styles of fishing, thats why these matches are so important if England are going to remain the number 1 side in the world. I think Mark Downes, Darren Cox and Sean Ashby deserve a big pat on the back for all their hard work organising this league and the Sensas final.

On the team front, the RAF lads had a brilliant team performance to win on the day, I think most of them caught on the bread, my Dorking team came second and we won the league overall with 2 starlets teams coming second and third.

Fourth place overall went to the RAF lads, a massive well done to Andy Johnson and his lads who beat some real quality teams along the the way, I wish I could fish more of these types of matches and i hope the league goes ahead again next year. 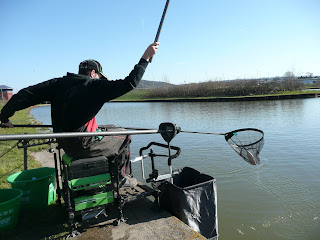 Tomorrow I am off to sunny Spain to fish the Merida Masters, its 25 degrees and the carp, barbel and catfish are feeding like mad, Come On.

If you have enjoyed reading this, please share it or Google+ it