The Preston Festival is the highlite of a lot of anglers season as most of the top names in the country line up to try and qualify for the Parkdean Final and the £25,000 first prize. At the draw on the monday morning you could feel the tension in the air as Clint gave his opening speech and wished everyone the best of luck for the week.

My week was to start at Bolingey, I drew peg 41, an ok section draw but would have preferred 29 or 44 in the wider area of this section. Recently this arm had been fishing very hard, and a low weight would be needed to win it, with this in mind I took a very cautious approach to my feeding of hemp and meat. I started at 14.5m and it wasnt long before I had signs of fish in my peg, they were very hard to catch and I missed a lot of bites but still managed to put the odd fish in the net and compared to the other anglers I could see in my section, I was doing ok.

At the half way point of the match I had 7 fish on the long pole and was still getting signs of fish in my swim and missing bites, but by now they had become impossible to hit and I spent the next hour without putting a single fish in the net. The last hour I caught 5 carp at 5m and finished with 12 for 69lb, just beating Andy Bennett on 44 who had 66lb, a nice start to the week.

Day 2, Match Lake, and I drew peg 22. I have drawn this peg before, you are faced with a lot of options, an island to you left, a bar at 16m, an island to your right, yet whenever this peg does produce it is usually at 5m. So I set up a load of rigs to cover the options and a get out of jail, silverfish rig for down the edge to my left.

When the match started I tried my island to the left, then the island to my right, then the bar at 16m and after an hours fishing I had next to nothing in the net, this was exactly the same as last time I fished this peg, still I was hopefull the 5m line would come to life in the last hour.

I then spent the next 3 hours watching other anglers catch carp in my section while the only bites I could get was from silvers down the edge, I kept trying the 5m line but without a bite. Going into the last hour I was so far behind everyone else in the section I was going to need a crazy spell to get reasonable points, sadly it never happened and I had my one and only carp 7 minutes from the all out, I weighed 33lb and only narrowly beat one other angler in the section, thank god for the 'dropper' rule. 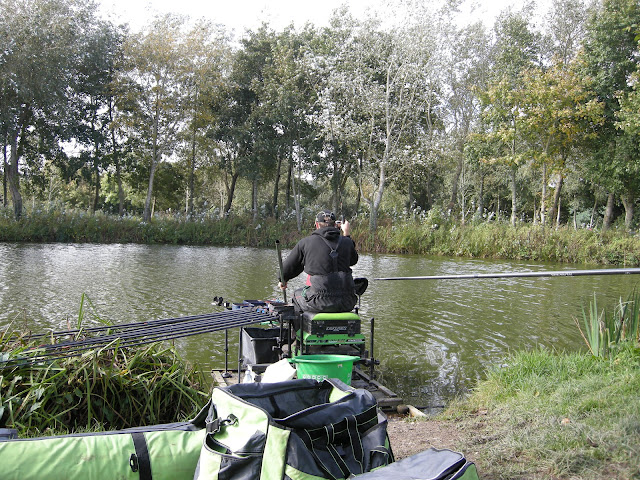 Day 3, Trelawney, and I drew peg 23 in the 'wides', a draw I was happy with. Only 45lb won the section the day before and 40lb was third, all 3 anglers were spread out so on paper it looked a fair section as no one peg, or the wind, was dominating this section. I have seen this lake when if you are not on a down wind end peg your are fishing for second.

I started my match on the method cast tight to far bank and in the first hour I had 5 carp, these were to be only carp I caught on the feeder in 2 weeks at Whiteacres, this was a great start when such a low weight would probably win the section. The next couple of hours I struggled to catch the odd F1, until the last hour when my 5 meter line started to produce the odd carp and F1, I finished with75lb and a comfortable section win to keep me in the race for qualifying.

Day 5, Porth, The day before, bream had won the lake and most sections saw some bream caught, this was going to be tricky one to call, by now a lot of anglers had no chance of qualifying for the final so they were going to Porth with one rod and the intention of trying to win the lake, if the bream fed. I knew that if I could just finish in the top 5 I would be in the final and if I won my section I could finish in the top 5 overall, so getting my plan right was crucial, plus a bit of luck. I drew peg 82, 4 anglers had caught bream in this section the day before.

I decided to stick with my normal Porth approach and hope that only the odd bream would feed, I started on the feeder and caught small roach and skimmers straight away, I fed a 13m line but was unsure if the wind and tow would allow me to present well enough to catch any number of fish, so when the feeder started to slow I picked up my 6m roach rig and started to catch small roach straight away, to start with the roach were very small and I wondered if I had done the right thing as I felt there was no weight going in the net, but with nobody around me catching much I stayed on this line. At about the half way stage of the match the wind started to ease up slightly and the chances of catching on the long pole were improving, so I had a look and caught a small skimmer straight away, things were looking better.

For the rest of the match I caught the odd skimmer and some roach and managed to keep fish going into the net for most of the day, by the end of the match I wasnt sure what weight I had, I hoped I might have had 10lb but only admitted to 7-8lb, a quick walk along the section showed that no bream had showed, in fact only 2 were caught on the whole of Porth, this shows how hit and miss fishing for them can be.

When the scales arrived, nobody was more surprised than me when I weighed 15lb 3oz, I had won the section and the lake, this now gave me 35 points along with 4 other anglers, it all depended on the 'droppers'. I knew I would be bottom of the bunch with a 2 points on the match lake, so I finished 5th overall and a massive congratulations to my mate Des who won his second festival in 2 weeks, some achievement.

After the Friday night presentation it was a massive rush sorting out all the bait and gear ready for the BIG next day, this was the sixth time I have qualified in the last 8 years, the feeling of fishing for such a large prize is brilliant. 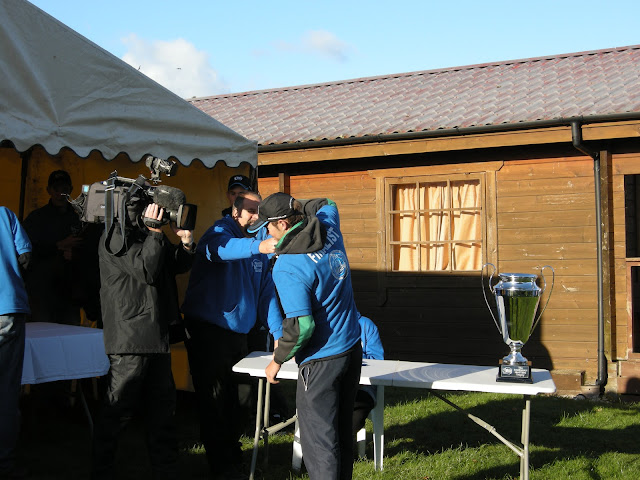 The draw is crucial on Jennys to win this match, most of my previous trips to the final have seen me catching not very much, so when I drew peg 4 I was very happy, in the Maver festival Alan Scothorne had drawn this peg and had caught 90lb+ of F1s on the feeder, and Des won last years final from the peg to my right, so I felt I was in with a chance.

My approach was to fish a method to the aerator and fish a long pole with worms, I hoped the feeder would keep going around all day and I would have a nice easy match, I would only need the pole line if the feeder dried up, I had Harry Billings at the next peg who set up similar gear to me. 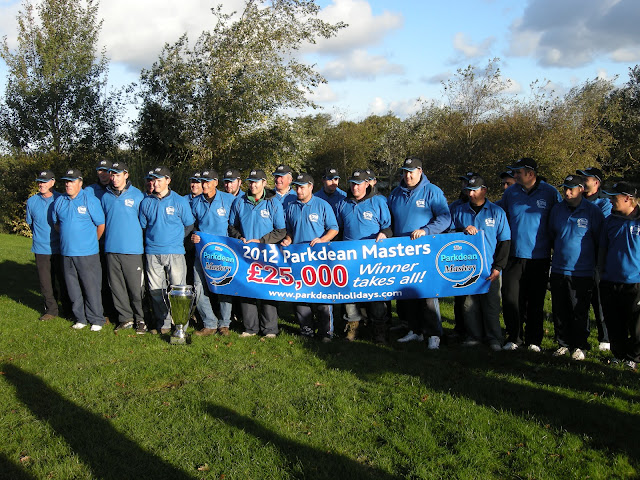 When the whistle went most people picked up the feeder rods, I did and was most surprised when it took 8 casts before I had an indication, F1s could be seen swirling around the rope connected to the aerator, yet they were proving very hard to catch, when I did get a bite quite a few would simply come off on the way back, this was proving a problem for quite a few anglers faced with catching F1s on the feeder.

Harry on my left was the first to come off the feeder and first drop in on the long pole he caught an 8lb carp, so I stayed on the feeder a bit longer, without much going into the net, before picking up the pole I had a slow start on the pole while Harry was catching steady, I was now starting to fall behind , I was catching the odd fish but struggling to keep pace with Harry, a change of tactics was called for so I changed to a shallow rig and immediately caught 2 carp for 15lb, now I might have been in front of Harry, but he saw what I had done and he switched to fishing shallow and he caught 4 more carp shallow, I caught F1s, skimmers and roach, but no more carp, steadily until the end and weighed in 52lb, Harry weighed 67lb, I knew he had beaten me because of the carp. I finished second in the match, for which you get nothing, and was naturally dissapointed but felt that the experience would make me a better angler for when I next get in a similar situation again.

A massive well done to Harry, a great bloke and a brilliant angler who has helped me a lot in my early days at Whiteacres, with 25 big ones in his bank account perhaps he will buy a new car that doesnt need a piece of wood to hold the boot open. lol.

All in all, I had a great 2 weeks, 4th in the Maver, 5th in the Preston, 2nd in the Final, won a few bob and met up with a lot of good mates, bring on the Silverfish Festival.