Sunday was the second round of the Aldershot Winter League at Gold Valley, Des and I travelled together, all the way up the M4 there was warning signs about the high winds and the chance of really bad weather, so the prospects of catching on a long pole or waggler looked very slim, we also had it in the back of our minds, would we get home ok??
Gold is the best venue in the world when you draw well, but not every peg is full of fish, so when Des drew 39 on Gold, next to the long island, and I drew 76 on middle we were both hopeful for a good days fishing. These two pegs are almost back to back, so we could have a bit of banter during the day. 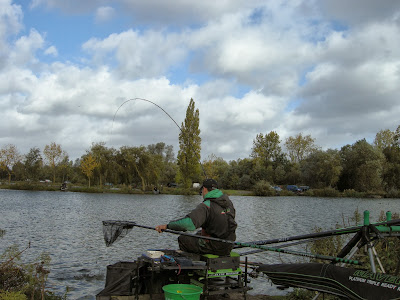 My match started off a bit slow, after the first hour I hadn't caught and most of the anglers on my bank had at least one carp, I was just starting to think 'I must be doing something wrong' when the tip flew round and I was into my first carp of the day.

Des had a lot better start than I did, he caught 5 carp for nearly 40lb, in that time, he was fishing a method feeder up the side of the island and firing pellets over the top. The weather was still mild and the fish seem to be responding to bait being fired in, thats if you could you could avoid the seagulls.

The gulls at Gold have really got a taste for pellets and its amazing to see the speed that they drop from the sky to snatch a pellet before it sinks too deep, at times it was hard to get any pellets to the bottom before the gulls had them, I had to wait for someone else to feed, then when the gulls moved I could get some out, I couldn't feed as often as I would like. 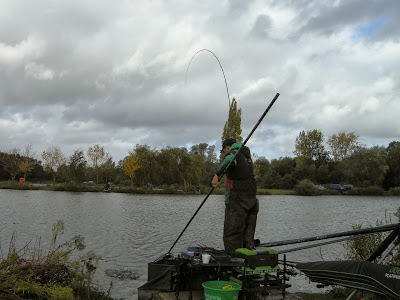 After I had caught my first carp, I then got regular bites for the next couple of hours, fishing a straight lead with a 11mm pellet on the hook, Des was also catching and we both had a similar number of fish after 3 hours, regular feeding was the key, Will was on the opposite bank of Gold to Des, he had the wind off his back and was able to fish a pellet waggler and was catching well. 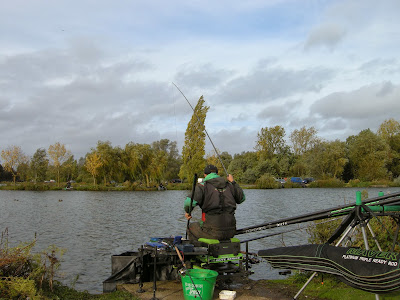 As the match progressed I was starting to feed my 5m line with meat and pellets and an edge line with ground bait, hoping for a good end to the match, edge fishing had been really good in some areas recently, with big fish making a huge difference.
The wind had formed a strong undertow on the lake and on my bank it was towing back against the wind, but it was so strong I couldn't get good presentation and never had a bite doing it, some of the anglers around me spent longer on it, but all they did was foul hook.
I had a free peg to my left, where I put my groundbait, in about 3ft of water, but this was facing the wind and the surface water was pushing the float back under the pole tip, not ideal but I managed to catch 4 carp in the last hour, then just before the hooter sounded, I hooked a big 'munter' down the edge, which took me out into the lake and I had to add the full 16m of pole to keep in touch and eventually it snapped 0.20mm hook length, I dont think it was foul hooked, but it may have been.
I finished with 17 carp for 102lb, and a section win, while Des had 17 carp for 127lb and third in the match. 128lb was second and 131lb won it, it was very close, there was also another 127lb for fourth.
The wind may have been very strong, but the carp loved it, and I cant remember a winter league at Gold wih so many 100lb+ weights, as Arnie says, 'I'll be back".
I have just got the latest carp pole from Maver, called Elite Carp 4, and this was the first time I had tried it and the few fish I caught on it, it felt perfect.
Categories: Photography
Posted By: Callum Dicks
Search
Recent Posts
Recent Comments
Archives
Categories
Meta
© Bristol Angling Centre. All Rights Reserved.